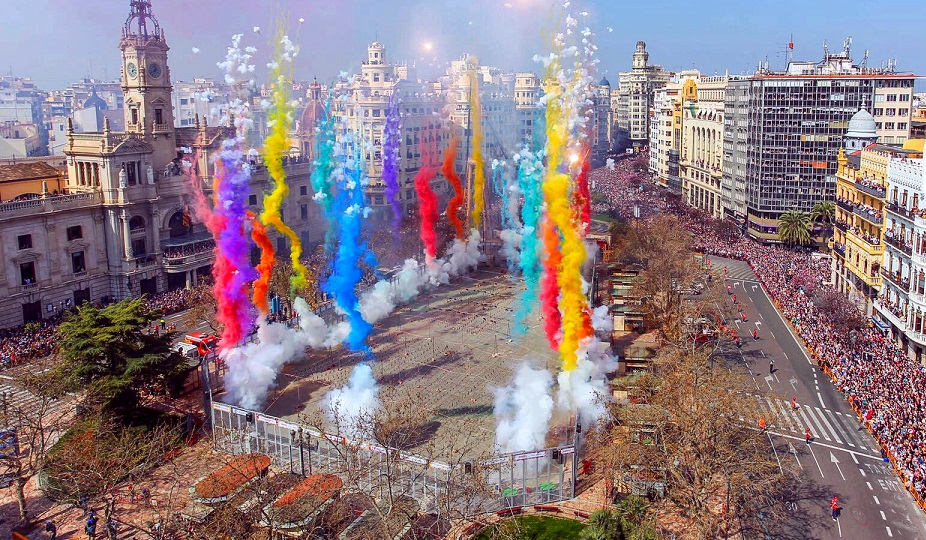 Valencia will have mascletaes and fireworks castles in the neighborhoods on October 9 by ValenciaBonita September 23, 2021
in PLANS AND EVENTS

Valencia, Thursday, September 23, 2021. As Cope has published, the city of Valencia will have mascletaes and fireworks castles on October 9. Gunpowder will reign on October 8 and 9, 2021 with six pyrotechnic shows in different neighborhoods of the city of Valencia, discarding the shot in the Plaza del Ayuntamiento within the programming of October 9, 2021 for Community Day Valencian.

The digital medium also states that, “there will be six pyrotechnic shows during October 8 and 9. On October 8, three mascletaes and a castle will be fired through the companies of Pirotecnia Vulcano, Pirotecnia Alpujarreña, Pirotecnia del Mediterráneo and Pirotecnia Zarzoso. While the Pirotecnia Valenciana will be in charge of firing the mascletà and the fireworks castle on October 9. With this, the Valencia City Council would once again decentralize the mascletaes, opting for the realization of several simultaneous shots in different parts of the city. The same formula that he used in Fallas 2021. According to what this media has learned, the neighborhoods of Camins al Grao, Benicalap and El Grao would be some of the locations chosen for the celebration of these pyrotechnic shows ”.


The medieval market will begin next October 7, 2021 until the 12th of the same month, both inclusive, a medieval and handicraft market that this year will be located in "Las Alameditas de Serranos", between the Serranos bridge and the Puente from San jose. This year, due to Covid-19, the market is moving to that location and not over the bridge and Plaza de los Fueros.

*
Poster of the medieval market of the Torres de Serranos in 2021, which this year, however, will not be located there, but in the alameditas.

The market, which will have a schedule from 10:30 to closing from October 7 to 12, will have craft, food, gastronomy, performances, attractions and music stalls, all following the current health regulations on Covid-19. It promotes FeVaMic, organizes Valero Producciones and the Valencia City Council collaborates.
In the market area, there will be a reduced representation of the Embassies and, perhaps, a concert of festive music, specific activities that the Valencian Federation of Moros i Cristians, FeVaMiC, has to confirm, who has been kind to Valencia Bonita to anticipate part of the programming of "Les Festes de Moros i Cristians al Cap o Casal 2021". The Mora y Cristiana Entry will have the same return route as the Senyera, that is: by Alfonso el Magnánimo, Pintor Sorolla and Barcas), and the participants will do so with a mask and not in "filaes", but in "battalion".

Councilor Pilar Bernabé will be the bearer of the Senyera in the civic procession on October 9:

Bernabé thanked "the effort and responsibility of all Valencians, which will allow us to celebrate this year on October 9".

The Councilor for Sports, Innovative Development of the Economic Sectors and Active Aging of the Valencia City Council, Pilar Bernabé, will this year be in charge of wearing the Real Senyera during the civic procession that will take place during the events commemorating October 9 .

Bernabé has expressed that "it is an honor to be the bearer of the Reial Senyera, and I only have words of gratitude for giving me this opportunity". This year the procession is resumed, which has not been carried out since 2019 due to the restrictions imposed because of the health crisis. Bernabé took advantage of this occasion to thank "the effort and responsibility of all Valencians, who throughout this time have maintained an exemplary attitude, which will allow us to celebrate this year on October 9", and has stated that " on October 9 we are going to celebrate this exercise of responsibility that we have all done, and we are going to dedicate the events to the effort of the Valencian people ”.

As published by Levante EMV, the descent of the Senyera will be made and in the Civic Procession there will be a parade with a mask (the attending public must keep their distances). This year the celebration with the Senyera has been guaranteed: its exhibition in the Crystal Hall on the days before.
Klik om te vergroten...